The Rovers boss reacted to his sides opening three games, with a trip to Aberdeen to face newly promoted Cove Rangers first up, before two home games on the bounce against Dundee and Greenock Morton.Â 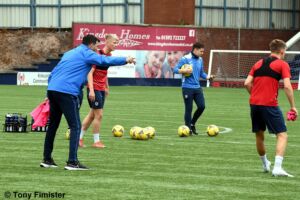 Murray is anticipating excitement surrounding the opening two games, as he looks to kick off the league season with three points in Aberdeenshire, in order to have Starkâs Park packed to the rafters and rocking when relegated Dundee come to Kirkcaldy the week after.Â

âYou can always try to guess the opening fixtures as to who youâll get and to where youâll get your points from but I personally think that itâs a really good game for us.

âMost people want a home game to start, but it doesnât really matter â you’ve got to play everyone at some point.Â

âWeâve got two long away trips in succession with Aberdeen in the final League Cup group game before going to Aberdeen again to play Cove on the Saturday, which is fine.Â

âWeâve got two home games though straight after with Dundee coming to us and then Morton visiting the week after.Â

âCove will obviously be unveiling their Champions Flag so hopefully itâll be a capacity crowd.Â

âThere will be plenty excitement about the game as well with them having won the league last season and getting promoted.Â

âItâs a place I know well from going with Airdrie over the last two years but weâll look forward to coming back for our first home game in the league too and it will be another exciting one with Dundee coming to town and not travelling too far.Â

âWith the way season ticket sales are going, which have been fantastic, weâre well over a thousand now so itâll hopefully mean that the stands are rocking for that first home game.Â

âIf both teams get off to a winning start, then it will only generate more interest and publicity aroundÂ the game.Â

Murray insists that there are no easy games â with the Championship as tight as it ever has been.Â

The Rovers Supremo pointed to local rivals Dunfermline who let their eye off the ball last time out as he looks to avoid a startling repeat.Â

âYou look down the league and as to what the league looked like last season, with that fixture list, there are no easy games.Â

âNo team is any easier than each other and theyâll all match each other on paper too.Â

âWe just need to look at Dunfermline last season, they were widely tipped for the title before a ball was kicked and after fixtures were released. Â

âThat shows us weâve got to keep our eye on the ball and not let our standards slip, and the standards set in Pre-Season so far have been nothing short of brilliant.âÂ