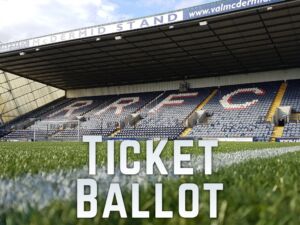 UPDATE 13th Jan: The draw has now taken place for the Arbroath ticket ballot, and the list of those successful appears here. Please enter your barcode for further instructions. Thanks to everyone who applied.

No further tickets will be available for this fixture, so please only attend Stark’s Park on Saturday if you were successful in the ballot.

As we are still under government restrictions on crowd numbers, we are able to offer a limited number of season ticket holders the chance to attend our fixture with Arbroath using a random ballot system.

Our ballot system worked very well at our fixture with Dunfermline Athletic. By using a group-based draw, rather than individual selection, fans were able to sit with those they normally attend games with. Thank you to everyone who applied and attended.

We will be repeating the same ballot process for the Arbroath game on Saturday 15th January (with a couple of changes, described below).

Entry for the ballot will be open from today (Monday 10th January) until 4pm on Thursday 13th January.

As before, fans are asked to enter as groups – which can be from 1-5 season ticket holders. You’ll need the barcode numbers on the back of your season ticket cards. Groups will then be chosen randomly to attend the game – with either all of your group being successful, or none. If you wish to enter individually (where some may be successful, while others are not) please enter each person as a separate group.

The list of successful groups will be made available at 7pm on Thursday. Please log onto the website again at that time to check if your group was successful (by entering your barcode number) as well as to read the instructions on attending.

Based on the feedback after the Dunfermline derby, we’ll be making a couple of changes for the Arbroath fixture:

No other tickets will be made available for this game, so please do not attend Stark’s Park on Saturday if you are not successful in the ballot.

Any Season Ticket holders not successful in getting a ticket can still view the game online for free at www.raith.tv.