Since 2012, supporters group The Neeburs o’ Geordie Munro have presented the manager’s choice of the most improved young player with a new pair of boots, valued up to £150.  The presentation is made in memory of Neeburs who have passed away over the years. 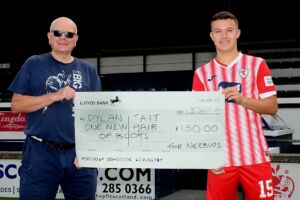 The award has formerly been made at the end of the season, but has been changed to fit in to the start of the season allowing the boots to kick into action for the Rovers without delay.

The presentation went ahead recently with manager John McGlynn explaining, ‘‘I would like to choose Dylan Tait for the 2020-21 award, as I did when giving him the young player of the season award last year.

He played a massive part in the team throughout the season; contributing with his excellent passing range, tireless running, contributing with goals and assists, showing a great attitude to learn and developing into a top midfielder”.

Clearly Hibs also saw the promise in Dylan’s footballing talent and the Neeburs wish him all the very best in his move to Easter Road.