The club will be broadcasting its Player of the Year Awards for season 2020/21 this weekend. 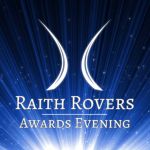 Due to the current situation, the ceremony took place in the presence of the entire playing squad at Stark’s Park and recorded by RaithTV early last week.

Ordinarily, the Rovers squad, coaches, staff and supporters would have attended a formal dinner and awards function at the Dean Park Hotel to see the players presented with their awards and to celebrate the club securing a place in the Premiership Playoffs, however as the hospitality industry is still operating under restricted circumstances this has not been possible this year.

The Raith Rovers FC POTY Awards EventÂ will be available for supporters to view for FREE on the RaithTV YouTube channel here from 8pm this Friday (7th May 2021).

There are 8 awards up for grabsâ¦.

The event will be shown as a âpremiereâ on the clubâs YouTube channel onÂ Friday 7th May 2021Â at 8pm. Weâd love for as many of you to join us for the premiere showing as possible, as viewers can interact using the YouTube chat function as the awards are announced.

As soon as the premiere showing ends, the awards event will remain available to view on YouTube at any time.