Iain Davidson became only the third player in the 138 year history of Raith Rovers Football Club to reach the landmark of 500 hundred first team appearances with his start against Livingston in the 3rd Round of the Scottish Cup yesterday. ‘Davo’ joins Willie McNaught (658) and Andy Young (622) in reaching the historic milestone. Of Davoâs magic 500, an impressive 473 have been starts, with only 27 coming from the substitutesâ bench. Itâs also worth noting that in his 14 seasons at the club he has only ever been a named substitute, and then never played during the 90 minutes, on 15 occasions. All of these impressive numbers reflect a player that no matter which of the 8 managers he has played for, all hold him in the highest regard.

The current stability of the club both on and off the park could not be in greater contrast to the turmoil which surrounded Starkâs Park when Iain Davidson first signed for the club on 29th July 2004 – joining from Scarborough, having already spent time in the youth system at Sunderland (captaining the reserves) and a brief period at Brechin City.

Within his first few games at Starkâs Park he knew it was going to be challenging under the new Claude Anelka regime. He later said â âI knew in pre-season that year something wasn’t right. The players didn’t have the basics like controlling a ball. Things you learn as a kidâ

Davo made his debut in season 2004-05 against Albion Rovers on 31st July 2004 in a First Round League Challenge Cup game at Starkâs Park, but in total only made 5 competitive appearances for Anelka until the managerâs departure on 8th October 2004. When Gordon Dalziel became manager and towards the second half of that first season Davo established himself as a first team regular, making 32 appearances in his debut Rovers season. 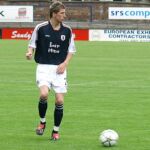 Davo made 39 appearances in the 2005-06 season and even chipped in with a couple of league goals against Dumbarton and Alloa. During that season the team had experienced players like Todd Lumsden and Mark Campbell in the centre of defence along with Chris Silvestro, Derek Ferguson, Scott Crabbe and Eddie Annand at various periods. It was the season when Gretna strolled to the title with Rovers finishing 7th in the Second Division. 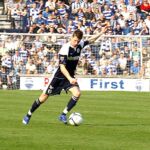 The 2006-07 season had hardly started before manager Gordon Dalziel was sacked on 31st August 2006. Craig Levein came in for a short period as manager before handing over the reins to John McGlynn on 21st November 2006. Despite the changes in management Davo once again made a significant contribution with 39 appearances and again notched a couple of league goals against Alloa and Stranraer. He also recorded the first of a few red cards with his sending off in a 1-1 draw away at Forfar. The season ended in defeat in the play-offs against Stirling Albion with Davo playing in both games. 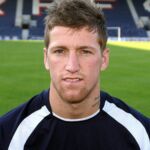 2007-08 was one of those seasons filled with hope and despair. Rovers started the season well winning 7 out of the first 10 league games. The potential banana skin of a Scottish Cup tie away at Threave Rovers was easily overcome 5-0 with Davo scoring one of the goals. He also scored away at Berwick Rangers and scored his only brace for the club against Cowdenbeath in a 4-1 win. Rovers good early start stalled and Davo once again found himself in the end of season play-offs this time defeated by Airdrie United. Davo made 38 appearances during this season. 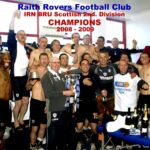 The 2008-09 season saw Davo make his greatest number of appearances in one season totalling 43 including 33 league games (the other 3 league games missed through suspension). It was a great season for the club with promotion finally sealed at Hampden Park on 2nd May 2009 in a 1-0 victory over Queenâs Park. Rovers finished the season strongly taking 25 out of the 27 points available over the last 9 league. Davo did get on the scoresheet with his only goal of the campaign in a 2-1 victory over Arbroath. The achievement of securing promotion was a tribute to a settled team and in no small part to Davoâs steadying and hard-working influence on the team. 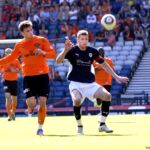 The following season, 2009-10 continued the excitement of the previous with a fantastic cup run that took Rovers all the way to the semi-finals. Ironically Davo only played in one of those cup ties, the actual semi-final itself in the 2-0 defeat by Dundee Utd. Although this was an injury hit season for Davo he still managed to make 29 total appearances and grabbed a goal in a 2-1 win away at Airdrie Utd. 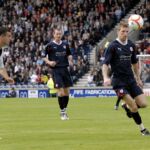 In the 2010-11 season Davo made 40 appearances, scoring twice. He made 23 consecutive starts between August and February. He opened the season with a goal in the first friendly of the season against Montrose and crowned it with a goal against Dunfermline in a 2-0 win a league match in August. 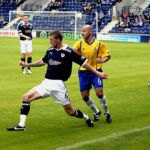 Season 2011-12, the final season of Davoâs first stint at Starkâs Park, ended with him making 31 appearances although he did fail to score for the first time in 7 seasons. The team finished 7th in their third consecutive season in the First Division.

In total he had made 291 appearances and scored 12 times in those first 8 seasons with the club.

Having joined Dundee on a free transfer in June 2012 he was immediately thrust into Premiership football with Dundee promoted after Rangers demotion to the fourth tier. Although relegated at the end of that 2012-13 season Davo was part of the Dundee side that won the Championship the following season and he played his third and final season for the Dee in 2014-15, in total making 83 appearances over 3 seasons. 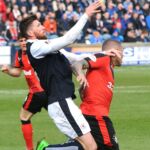 Davo returned to Starkâs Park at the start of season 2015-16, on the 8th August 2015, signing for Ray McKinnonâs new look Rovers. It was like the 31-year-old player had never been away and he made 36 appearances in his first season back scoring just one goal in the 2-1 League Cup victory against Hamilton. It was a relatively successful season with Rovers finishing in fourth and in a play-off place. This was to be Davoâs third taste of the play-offs but a tough couple of games against Hibs, despite Rovers winning the first leg, ended in a 2-1 aggregate defeat. 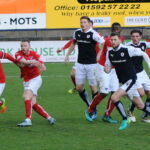 2016-17 brought another new manager to the club with Gary Locke taking over from Ray MacKinnon. Despite appearing to be a good fit and a number of new signings mixed with experienced players Rovers struggled and although there were some favourable results against Ross County, Hearts, Hibs and Dundee United Locke failed to arrest a horrible run of form and was sacked on 8th February. Davo made a total of 29 appearances under Gary Locke and scored in the 4-2 league win away at Falkirk. John Hughes came in for the rest of the season and Davo went on to make another 9 appearances including another 2 play-off appearances against Brechin City which ended in defeat and relegation. 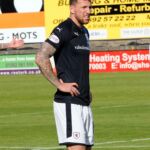 The following seasonÂ Rovers welcomed another new manager to the club in Barry Smith, the same manager who had previously signed Davo at Dundee. The dressing room was a much happier place following the poor results under Locke and the disharmony under Hughes. The 2017-18 season was a 2 horse race with Rovers just being pipped to the title by Ayr United despite Rovers only losing 5 league games all season. Davo once again endured the almost seasonal event of the play-offs but the outcome was sadly the same with Rovers falling this time at the hands of Alloa. Davo made a total of 39 appearances and chipped in with a goal in a 2-0 defeat of East Fife at Starkâs Park. 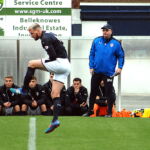 Rovers went into the 2018-19 season as title favourites but ultimately ended in 3rd behind champions Arbroath and Forfar. They started the season well and Barry Smith guided them to joint top but resigned in September paving the way for the return of the dream team of McGlynn & Smith. On John McGlynnâs return Davo said â âThe man is a workaholic and I canât speak highly enough of him. Hereâs hoping it will be another successful time with him.â Davo made a total of 41 appearances during the season and scored two goals, both in the league. The first was the opener in a 5-1 win over Stenhousemuir and the second was a late equalizer against East Fife which ended with Rovers winning 2-1 with a late Kevin Nisbet goal. The season also included an amazing 4-3 Rovers victory at The Penny Cars Stadium against Airdrieonians. Davo was sent off after 72 minutes and with the team 3-1 down Rovers scored 3 goals in the final 7 minutes to win the game. Rovers once again ended up in the play-offs and Davo played in all the games. Despite navigating through the first tie against Forfar Athletic, Rovers were ultimately beaten in the final by Queen of the South. 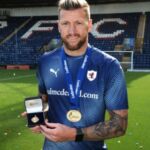 Which brings us to last season. Iain Davidsonâs lucky 13th season as a Raith Rovers player. 2019-20 was memorable in so many ways but not least of which Raith Rovers regained their place in the Scottish Championship having been top of the league for 21 out of the 28 games of the season and pipping Falkirk by just one point and following a review by an arbitration panel. In line with almost every one of his seasons at the club Davo made a major contribution to the league win. He played in the first 23 games from friendlies to league games and his run was only interrupted by a red card he received against Peterhead in a 2-0 league defeat. He started the final 10 games before lockdown kicked in and the season was halted, playing in 37 games in total. 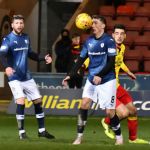 The run included a magnificent Tunnock’s Caramel Wafer Challenge Cup Semi Final victory over Partick Thistle. Davo was not with Rovers when they won the Ramsden Cup in 2014 and so this was going to be the chance for him to win a cup with the Rovers. It may still happen but as yet the 2019-20 Challenge Cup Final vs Inverness CT has no date….

This season has been a bit stop/start for Davo as he closed in on his magnificent 500 gameÂ milestone. His appearance against Livingston yesterday was his 18th of the season. He weighed in with the winning goal against Morton at Cappielow and also got the Rovers equalizer against Alloa before we ran out 3-1 winners recently. 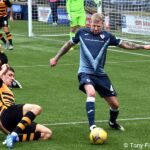 Iain Davidson has now made 500 appearances, over 14 seasons, scoring 19 times for Raith Rovers Football Club and holds the record for the third highest number appearances for the club, the highest ever for a Langtonian. He was also one of the first group of legends to be inducted into the Raith Rovers Hall of Fame in November 2012. Davo has not only been a great player for the club but over the years he has also been a great ambassador off the pitch representing the club at many local events.