We are delighted to announce that the Management Team of John McGlynn and Paul Smith have committed themselves to Raith Rovers FC for the next two seasons until the end of season 2021 – 22. 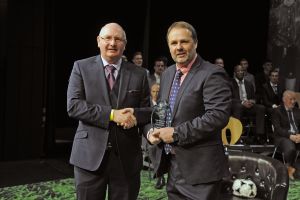 John returned to work on a part – time basis yesterday (1st July 2020) and will soon be joined by Paul. The management’s number one priority is building a squad for the coming SPFL Championship season, and further announcements on this are expected shortly.

In these uncertain times the RRFC Board of Directors are working hard to back them with the funds necessary to build a team that can compete against clubs in the SPFL Championship.

Rovers Chairman Bill Clark said âOn behalf of the Board, I am very pleased that John and Paul have signed contract extensions for the next two seasons. Following on from their successful season winning promotion from SPFL League 1 we are confident that they will assemble a squad of players capable of competing in the SPFL Championship next season. We hope that we will, at least, consolidate our position in that league and be able to take Raith Rovers FC on to greater things in the future. I am sure I speak for all our supporters in wishing John and Paul every success in meeting the challenges which lie aheadâ.

Manager John McGlynn said âI am delighted to sign a new contract which keeps us at Starkâs Park until the summer of 2022. I have thoroughly enjoyed my second term at the club and look forward to working with the players in the SPFL Championship. Iâd like to thank everyone for their support and for backing the club financially. Hopefully we will get the chance to celebrate the league win when we can all be back at Starkâs Parkâ.