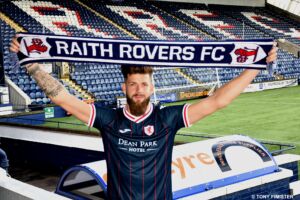 Raith Rovers are delighted to formally announce the signing of striker John Frederiksen on a contract to the end of the current season.

The signing of the 26-year-old is being made outside of the transfer window, as the player is a free agent. As a foreign national, a work permit also had to be applied for before John could be signed and announced as a Raith Rovers FC player.

The club are extremely grateful to Lisa McGuigan, Solicitor at McGlashan MacKay Solicitors in Glasgow, who specialise in Immigration Law and who assisted extensively in the work permit application process to ensure that John’s visa was applied for as smoothly as possible.

The 6′ 8″ frontman started his football journey in the youth system of NB Bornholm in his hometown of Nexo, Denmark and after also being connected to the youth systems of Midtbornholm, Ikast and FC Copenhagen he then signed his first professional contract with NB Bornholm before moving to Fredensborg in 2014.

The chance to play in the Faroese league arose in 2017 when John signed for 07 Vestur before moving on to another Faroese team, HB. 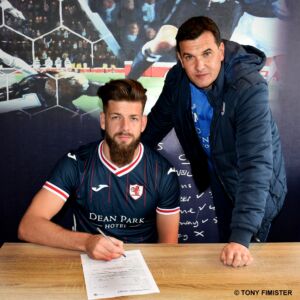 John moved back to Denmark in 2019 to play for Frem and then Skovshoved before then playing football in the Finnish second tier with Musan Salama. He was most recently playing for SKU Amstetten in the Austrian Football Second League before becoming a free agent at the end of May 2022.

John qualifies to represent the Faroe Islands through his parents, representing the Faroese under 17s and Under 19s before making his debut for the full national side in September 2021 when he came on as a substitute against Denmark in a World Cup qualifier. 2 further substitute appearances were made in World Cup qualifiers by John last year, v Austria and then v Scotland in the Torsvollur Stadium on October 12th 2021.

A delighted John Frederiksen spoke to RaithTV after signing for the club:

Manager Ian Murray chatted to RaithTV about what he hopes his new striker will bring to the Rovers squad this season:

Welcome to the Rovers John!

This is the official website of Raith Rovers Football Club. All original text and images on this site are the copyright of Raith Rovers F.C. Match images reproduced with permission of the Scottish Professional Football League. Unauthorised copying or reuse of text, photographs or video footage from this site is strictly prohibited. ©2023. Privacy Policy.