Recently the Raith Rovers Community Foundation squad headed back up over the Tay Bridge to Dundee for the 2nd round of games in the Walking Football Scotland’s East of Scotland Over 50s League.

Currently sitting in third place in the league with three wins out of three in the first round, we played both of the teams above us….. 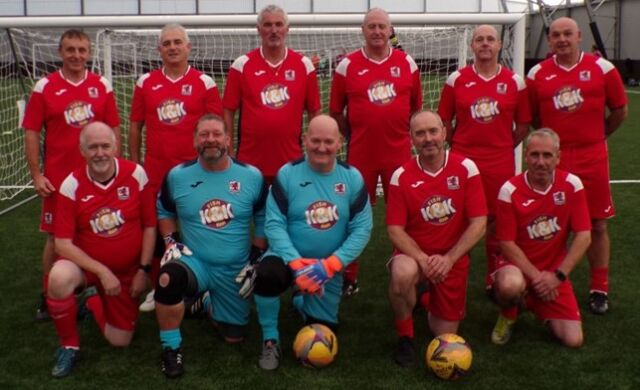 Game 1. St James Blue
St James won the inaugural competition 2 years ago and this year have entered two teams. This team are currently sitting in second place in the league having lost one game last month. We were expecting a tough, physical game and so it turned out as we go one down in three minutes. The team regroups however and bring things back level with a well taken goal by John Wylie in the tenth minute. This parity doesn’t last long as a third running foul gives St James a penalty which they convert to take the lead once again. With a bit of a pernickety referee the inevitable happens and St James give away a penalty as well in the fifteenth minute which John Wylie steps up to dispatch to put us level again. Once again the parity doesn’t last long but this time it’s the Raith team who slip into the lead in the seventeenth minute with a well worked team goal scored by Scott McIntosh. The goal now is to hang on to the lead and not concede and with some stout defending and time management we hang on for a hard-fought victory. 3-2 to the Rovers!

Game 2. St Andrews
We played St Andrews twice last year winning one game comfortably and drawing the other. But today’s a different day and we need to keep the momentum going. Two minutes in and we go one up with a nice move down the left which ends with John Wylie setting Harry Younger up for his first goal of the day. In seven minutes, we go two nil up with a move out of defence that ends with a John Wylie goal. A quick fire second of the game for John Wylie follows after a midfield pass from Scott McIntosh. Three nil up with five minutes to go John is substituted for Charles Doherty who, despite getting numerous chances fails to score and the game ends with another Raith win. 3-0 to the Rovers!

Game 3. Tayport
A new team to the league this year so we don’t know how good this team will be. A tough opening five minutes ends when John Wylie intercepts a throw out from the keeper and coolly converts to give us a lead. It’s a tough game with play moving back and forward and only some good marshalling in defence by Willie Carroll and Jimmy Robertson and some stellar saves from by Paul Gregory and Martin Page (we used a sub and didn’t play them both at once!) keeping our lead. In fourteen minutes however John Wylie gets through on goal to score his second goal of the game. It’s as tough a last five minutes as the first five but Raith hold on for the third win of the day. 2-0 to the Rovers!

Game 4. St James White
Our final game of the day and it’s against the current league leaders. This was the hardest, and probably most physical, game of the day and one we must at least get a draw in if we want to consider winning the league. The game doesn’t start well with Raith player Scott McIntosh picking up a yellow card in the first minute. Clearly rattled by this we go two nil down within three minutes but pull a goal back from John Wylie in the fourth minute. The game continues at a frantic pace (and with some incredibly inconsistent refereeing) and St James go three one up. Raith pull another one back with John Wylie turning his marker and slamming the ball low past the keeper. But the ref calls it back and penalises him for “turning too quickly”. Unbelievable! On nine minutes Harry Younger finally pulls one back only for St James to score in the next minute and retain their two-goal cushion. With five minutes to go John Wylie bags his fourth brace in four games to set up a grandstand finish. Lots of effort go into these last minutes but to no avail as St James hold out for a one goal win. 4-3 to St James White

We go in to the final month of fixtures with our destiny outwith our control hoping that St James White slip up. 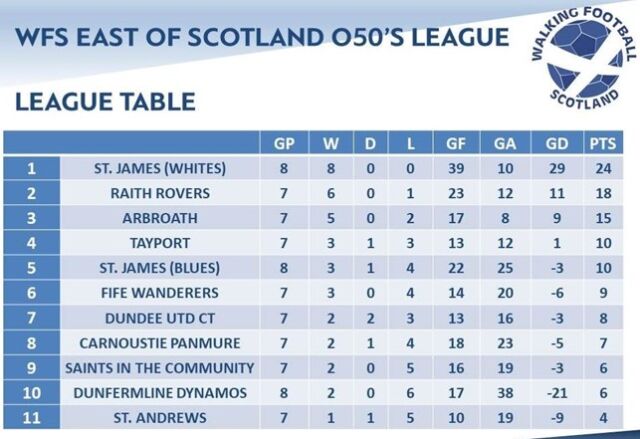