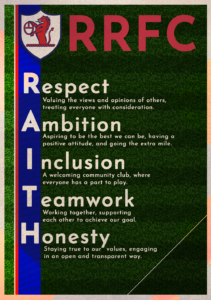 What is Project Inspire?

Project Inspire was launched in February 2021 with the following aims:  To capture and articulate what the ‘Rovers Family’ stands for – its vision, its values and behaviours, and how these could be promoted as a ‘brand’ as part of a wider exercise to improve the Club’s overall performance. The Project was managed from design to delivery by two of our committed and enthusiastic volunteers, Martin Christie and Bill Gilby, ably assisted by Steven Lawther – Well Done and Thank You Guys!

How was information collected?

Information and comments were collected from a wide range of members of the ‘Rovers Family’:  the players, former players, backroom staff, office employees, the Board, volunteers, fans, the Community Foundation Trustees, Community Foundation employees, community users, Stark’s Park Properties employees, sponsors etc.   Information was collected via virtual meetings; presentations to the RRFC Board, the RRCF Board, the Raith Forum, non-playing staff, and volunteers; establishing a Reference Group representing the key stakeholders as a key sounding board in piloting and testing drafts of the survey questionnaire etc; and engaging with the Raith Rovers’ social media team, ensuring maximum exposure was given to the launch of the survey questionnaire.

The survey attracted a high response rate:  836 responses, with 800 of these associated with Raith Rovers (including 775 fans/volunteers); the remainder from Stark’s Park Properties and Raith Rovers Community Foundation. Thank you to everyone who responded!

What were the results?

The majority of respondents showed solid support for Respect, Teamwork, Integrity, with less support for Commitment and Attitude.

What are the next steps?

We hope that all members of the Raith community will not only discuss and identify with the five Values. It is important that everyone lives and breathes these values and reflects them in their behaviour towards colleagues at Raith Rovers and others beyond the Club. They have the potential to strengthen relationships as we move forward to develop a real understanding of what it means to be a Community Club. We will keep everyone up to date with developments.

Please email projectinspireraithrovers.net  if you have any questions or comments.

Thank you again for your support.