Raith Rovers have made another acquisition and secured the signature of 18 year old striker Ethon Varian on loan from Stoke City FC. 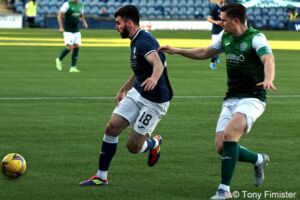 Ethan in action as ‘Trialist A’ in Davo’s testimonial

A native of County Cork – Ethan made his Republic of Ireland U21 debut in March, and has come through the ranks at The Potters most recently playing for their Under 23 side in EPL2, after signing as a professional in July 2020.

The striker has already, however, made his Rovers debut – replacing Matej Poplatnik at half-time of Iain Davidson’s Testimonial match v Hibs last Friday and acquitting himself well against Hibs’ experienced top flight defenders.

The loan arrangement is set to run until January 2022.

Welcome to the Rovers Ethon!

This is the official website of Raith Rovers Football Club. All original text and images on this site are the copyright of Raith Rovers F.C. Match images reproduced with permission of the Scottish Professional Football League. Unauthorised copying or reuse of text, photographs or video footage from this site is strictly prohibited. ©2023. Privacy Policy.