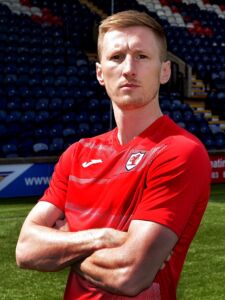 The club have made the first new signing of the close season, with the acquisition of left back Liam Dick.

Liam came through the youth system at Falkirk, making his first team debut as a substitute in the League Cup on 25 October 2011, and his league debut at the end of that season. In January 2013, Dick signed a professional contract with The Bairns.

Liam in action v Rovers for Stranraer in December 2017

Liam started a short-term loan deal with Stranraer in 2015, signing an extension to extend his loan at Stair Park until the end of that season and then signing for The Blues on a permanent basis for the next 2 seasons.

Liam then joined SPFL Championship side Dumbarton on 1 January 2018, leaving The Sons at the end of that season before joining Alloa.

Liam talked to RaithTV after signing his contract:

Welcome to the Rovers Liam!