The Scottish Professional Football League today announced that the final of the Tunnock’s Caramel Wafer Cup will not take place and that Raith Rovers and Inverness Caledonian Thistle have been declared joint winners of the competition for Season 2019 – 20.

Winners’ medals will be distributed to both clubs shortly.

Chief Executive of the SPFL Neil Doncaster said: “Sadly, the disruption caused by Covid-19 has meant that it has not been possible to stage the final of the Tunnock’s Caramel Wafer Cup 2019 – 20. We held off for as long as we could to give us the best chance of staging the Final in front of meaningful numbers of fans this season – but it just wasn’t feasible. 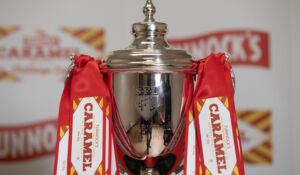 The SPFL Board has therefore declared Raith Rovers and Inverness Caledonian Thistle  Joint Winners. On behalf of the SPFL, our sincere congratulations to both clubs, their players and coaching staff on becoming the first ever joint champions of the competition.

We are looking forward to the Challenge Cup resuming next season, when it will be known as the SPFL Trust Trophy, supported by money donated by philanthropists including James Anderson. In the meantime, I would like to thank MG ALBA, Tunnock’s, and the Boards of both Inverness Caledonian Thistle and Raith Rovers for their flexible approach as well as for their patience and understanding in reaching this decision.”

Director of Multiplatform Content for MG ALBA, Iseabail Mactaggart, said: “MG ALBA have very much enjoyed our association with the Challenge Cup since BBC ALBA first became the broadcaster of that competition in 2008. We congratulate all at Raith Rovers and Inverness Caledonian Thistle for being joint winners of the Tunnock’s Caramel Wafer Cup 2019/20. We all missed the competition this season and we look forward to covering the SPFL Trust Trophy for Season 2021/22 later this year.”

Chairman of Tunnock’s, Sir Boyd Tunnock, commented: “On behalf of Tunnock’s, I congratulate the players, staff and directors of Raith Rovers and Inverness Caledonian Thistle on becoming joint winners of the Tunnock’s Caramel Wafer Cup. We have enjoyed our association with this unique competition and wish all the teams involved in next year’s competition the very best of luck.”

Raith Rovers Chairman John Sim commented: “On behalf of everyone associated with Raith Rovers, I am delighted that we have been declared joint winners of the Tunnock’s Caramel Wafer Cup. Whilst we are obviously disappointed that our fans, players and management team have missed out on the excitement of a final and the opportunity to win the cup outright, we understand that the moment has passed and that we should all now look forward.”