The 18 year old wide player has signed a new deal with the SPFL Premiership leaders, and will spend the remainder of the season playing for the Rovers in the SPFL Championship. 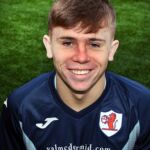 Kai has represented Scotland at all age groups up to Under 21 level, and has already experienced Championship football, impressing while on loan with Inverness Caledonian Thistle – playing 10 times and scoring 1 goal for the Highland side, in the first half of the current season.

Kai spoke to RaithTV before his first training session with his new teammates: