John attended an appointment at Royal Edinburgh Infirmary Outpatients at 5am last Monday (5th October) with stomach pains, after consulting with NHS 24. Over the following days he was fully assessed, and it was ascertained that he would require an operation later in the week.

With his surgery delayed to accommodate vital emergency operations, John underwent a successful gallbladder removal on Sunday morning. His rehabilitation is well underway, and he left hospital yesterday afternoon with his family. 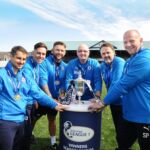 Speaking to www.raithrovers.net, John said “there are too many people to Thank individually for the care I received from the NHS this past week. The nurses and doctors in Ward 105 at Royal Edinburgh Infirmary provided exemplary care and attention at a time when health professionals throughout the country are stretched to the limit dealing with the COVID19 pandemic.

We look forward to welcoming John back to Stark’s Park in the near future!